Coronavirus Update: We care about your health and continue to service our customers safely. Read More

Your Browser Is Incompatible

You are seeing this message because we have detected you are using Internet Explorer 10 (or older) to browse our site. Unfortunately, this means that your browser is too old to display our site properly and that certain areas of the site may display incorrectly or not at all. Please upgrade to the latest version of Google Chrome, Mozilla Firefox, Internet Explorer, Microsoft Edge, or Apple Safari in order to view this site.

Duct Tape: Good for Everything but Fixing Ducts! 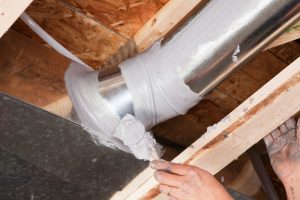 If you have a construction worker in your life, you’ve probably heard one of the many popular sayings they have: “All you need to have is two tools: If it doesn’t move and it’s supposed to, WD-40. If it moves and it’s not supposed to, duct tape!” That’s right, duct tape can resolve just about any situation—at least temporarily—except ductwork breaches. Go figure!

But the fact of the matter is that one of the biggest “energy thieves” in your home could be from leaks in your air ducts, which is something not a lot of people think about. Proper duct sealing from ventilation experts can stop your HVAC systems from losing 20 to 30% of the air that moves through the ductwork. Think about what that translates to: this is air you’re paying to cool your home in the summer that is simply going to waste. With professional duct sealing services in Winnetka, IL, though, you’ll see significant savings on your cooling bills.

If Duct Tape Is No Good, What’s Up With Its Name?

Duct tape was developed around the time of the First World War. A consumer-grade tape available in most stores, with a cloth back adhesive, its original purpose was to quickly seal up ammunition boxes, and was actually called duck tape. There are a couple possible explanations for this name: it was either because it was backed with duck cloth, or because the tape’s water-resistant properties reminded people of how water washed off a duck’s oiled back.

Around the 1950s, duck somehow became duct due to the assumption that it may work on ductwork as a method to repair and seal them. Superficially, this seems like it might work. However, tests have shown that it does not. The issue is that duct tape reacts poorly to heat and temperature fluctuations, which is common in ductwork. The adhesive of duct tape soon turns brittle and the tape fails. You can maybe expect it to last about a month before giving out.

With professional duct sealing, our technicians use special equipment, like resin-based mastic sealant and metallic tapes, to make sure the ductwork is made airtight. However, it takes more than just professional-grade sealing equipment to do the job effectively. HVAC technicians must locate where the leaks are occurring and access them, which is something an amateur cannot effectively do.

If you suspect that you’re in need of professional duct sealing, be sure to give our staff a call. You may hear hissing or banging coming from loose or breached ducts. Some noise right when your HVAC starts up and shuts down is normal due to the temperature fluctuations, but it shouldn’t persist.

We’ll professionally test to see where your ductwork is compromised—where you have air leaks—and then handle the sealing that is required to restore your HVAC system to peak condition all summer long.

Shavitz Heating and Air Conditioning is your resource for not only professional duct sealing services, but expert air duct design and installation and duct repair as well. Contact us today to learn more!